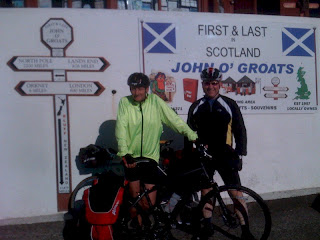 Mark first conquered the route from Lands End to John o' Groats some 31 years ago and this year decided it would be appropriate to complete the challenge in reverse - that is from Scotland to Lands End, NOT cycling backwards! Over the years the two friends have raised thousands of pounds for various charities and this trip will help Marie Curie cancer hospices

During some weeks of planning and training, the two friends had mapped out an alternative and considerably longer route through the outer and inner Hebrides and other Scottish islands, before hopping over to Ireland, Wales and England. As part of Mark's training plan he also recently took part in the London to Brighton cycle ride with a group of IPA branch colleagues (featured in Police World issue 3, 2010).

Mark and Paul started the JOGLE event from John o' Groats on 26th August and after some fantastic weather in Scotland they headed over to Ireland where they were greeted by IPA Region 2 secretary Pete Connolly for a much deserved beer in Belfast.

The duo then left Pete and continued into southern Ireland before catching a ferry over to Wales. In recent days the weather has taken a turn for the worse, but they have not let this dampen their enthusiasm and they are now over 800 miles into their challenge and making their way through Devon.... and are a few days away from Lands End.

You can follow their blog at www.jogle-thelongway.co.uk - why not log in and leave them a message of support?
Posted by IPA Birmingham at 14:27

IPA Birmingham
Birmingham, West Midlands, United Kingdom
Welcome to the Birmingham, West Midlands branch of the International Police Association. The branch is affiliated to both the Midlands region (number 5) and the UK IPA. Members meet regularly for social events and other matters associated with the International Police Association. The branch consists of a number of serving and retired officers, staff and partners and is very active.

Two of our committee members on the front steps at the International Conference Centre, Gimborn, Germany, May 2007.